On our final Best Books episode, Cynthia Barnett discusses The Sound of the Sea: Seashells and the Fate of the Oceans (Norton, July 6), an enthralling, information-packed paean to the mighty mollusk—one of Kirkus’ Best Nonfiction Books of 2021.

Here’s a bit of Kirkus’ starred review of The Sound of the Sea: “As environmental journalist Barnett notes, humans have long been captivated by seashells (‘the work of marine mollusks’), collecting and using them for art, jewelry, and currency. In this well-researched, consistently illuminating work, the author smoothly combines environmental science and cultural history to trace the origins and decline of mollusks. The book is divided into chapters based on a particular species—among others, the chambered nautilus, the lightning whelk, the money cowrie, the lettered olive, and the queen conch.…Fans of Rebecca Giggs’ excellent Fathoms will find much to savor here as well. An absolutely captivating nature book.”

Barnett and host Megan Labrise discuss the stories shells can tell us; what you’re actually hearing when you hold a shell to your ear; why she opened the book with a story of a girl collecting shells 100,000 years ago; her experience of traveling with her son to the Maldives on a reporting trip; Queen Rehendi Khadijah, who ruled the islands of the Maldives in the 14th century; the genius of Julia Ellen Rogers, author of The Shell Books, whose work was plagiarized by a more famous male scientist; the role that the Bailey-Mathews National Shell Museum on Sanibel Island played in conceiving and writing The Sound of the Sea; how a hurricane effects what’s beneath the waves; and much more.

Then nonfiction editor Eric Liebetrau joins Megan to highlight some of his favorites on our 2021 Best Nonfiction Books list.

Featherhood: A Memoir of Two Fathers and a Magpie by Charlie Gilmore (Scribner)

Under a White Sky: The Nature of the Future by Elizabeth Kolbert (Crown)

Punch Me Up to the Gods by Brian Broome (Mariner Books)

Seek You: A Journey Through American Loneliness by Kirsten Radtke (Pantheon)

Twelve Caesars: Images of Power from the Ancient World to the Modern by Mary Beard (Princeton Univ.)

The Bomber Mafia: A Dream, a Temptation, and the Longest Night of the Second World War by Malcolm Gladwell (Little, Brown)

Tacky: Love Letters to the Worst Culture We Have to Offer by Rax King (Vintage)

The Ground Breaking: An American City and Its Search for Justice by Scott Ellsworth (Dutton)

King of the Blues: The Rise and Reign of B.B. King by Daniel De Visé (Grove)

Also mentioned on this episode:

The Gulf: The Making of an American Sea by Jack E. Davis (Liveright/Norton)

Thanks to our advertisers:

You Be You by Richard Brehm

Our Take On This Week's Bestsellers 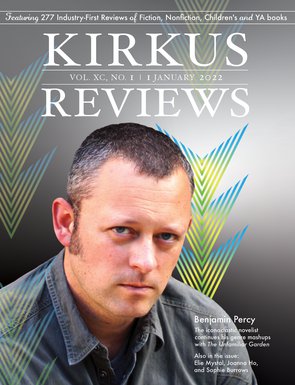 We talk to Benjamin Percy about his new novel, The Unfamiliar Garden, which blends the author's love for science fiction, horror and comic books.

Great Books & News Curated For You

Be the first to read books news and see reviews, news and features in Kirkus Reviews. Get awesome content delivered to your inbox every week.

We can’t wait for you to join Kirkus!

We’re glad you found a book that interests you!